FDA Approves G1 Therapeutics’ COSELA™ (trilaciclib): The First and Only Myeloprotection Therapy to Decrease the Incidence of Chemotherapy-Induced Myelosuppression

- Myeloprotective efficacy of COSELA resulted in reductions in the incidence and duration of severe neutropenia, and impacted anemia and the need for rescue interventions such as growth factors and red blood cell transfusions -

- G1 will host conference call at -

, (GLOBE NEWSWIRE) -- (Nasdaq: GTHX), a commercial-stage oncology company, today announced that the (FDA) has approved COSELA™ (trilaciclib) for injection to decrease the incidence of chemotherapy-induced myelosuppression in adult patients when administered prior to a platinum/etoposide-containing regimen or topotecan-containing regimen for extensive-stage small cell lung cancer (ES-SCLC). It is the first and only therapy designed to help protect bone marrow (myeloprotection) when administered prior to treatment with chemotherapy. COSELA is expected to be commercially available through G1’s specialty distributor partner network in early March.

“The approval of trilaciclib (COSELA) is an important advance in the treatment of patients with extensive-stage small cell lung cancer receiving chemotherapy,” said Dr. , for Research in Cancer in the and . “The most serious and life-threatening side effect of chemotherapy is myelosuppression, or damage to the bone marrow, resulting in reduced white blood cells, red blood cells and platelets. Chemotherapy-induced myelosuppression may lead to increased risks of infection, severe anemia, and/or bleeding. These complications impact patients’ quality of life and may also result in chemotherapy dose reductions and delays. To date, approaches have included the use of growth factor agents to accelerate blood cell recovery after the bone marrow injury has occurred, along with antibiotics and transfusions as needed. By contrast, trilaciclib provides the first proactive approach to myelosuppression through a unique mechanism of action that helps protect the bone marrow from damage by chemotherapy. In clinical trials, the addition of trilaciclib to extensive-stage small cell lung cancer chemotherapy treatment regimens reduced myelosuppression and improved clinical outcomes. The good news is that these benefits of trilaciclib will now be available for our patients in clinical practice.”

Chemotherapy is an effective and important weapon against cancer. However, chemotherapy does not differentiate between healthy cells and cancer cells. It kills both, including important hematopoietic stem and progenitor cells (HSPCs) in the bone marrow that produce white blood cells (immune cells that help fight infection), red blood cells (cells that carry oxygen from the lungs to the tissues), and platelets (cells that prevent bleeding from cancer, surgeries, chronic diseases, and injuries). This chemotherapy-induced bone marrow damage, known as myelosuppression, can lead to increased risk of infection, anemia, thrombocytopenia, and other complications. Myeloprotection is a novel approach of protecting HSPCs in the bone marrow from chemotherapy-induced damage. This approach can help reduce some chemotherapy-related toxicity, making chemotherapy safer and more tolerable, while also reducing the need for reactive rescue interventions.

“Chemotherapy is the most effective and widely used approach to treating people diagnosed with extensive-stage small cell lung cancer; however, standard of care chemotherapy regimens are highly myelosuppressive and can lead to costly hospitalizations and rescue interventions,” said , Chief Executive Officer at . “COSELA will help change the chemotherapy experience for people who are battling ES-SCLC. G1 is proud to deliver COSELA to patients and their families as the first and only therapy to help protect against chemotherapy-induced myelosuppression.”

COSELA is administered intravenously as a 30-minute infusion within four hours prior to the start of chemotherapy and is the first FDA-approved therapy that helps provide proactive, multilineage protection from chemotherapy-induced myelosuppression. The approval of COSELA is based on data from three randomized, placebo-controlled trials that showed patients receiving COSELA prior to the start of chemotherapy had clinically meaningful and statistically significant reduction in the duration and severity of neutropenia. Data also showed a positive impact on red blood cell transfusions and other myeloprotective measures. The trials evaluated COSELA in combination with carboplatin/etoposide (+/- the immunotherapy atezolizumab) and topotecan chemotherapy regimens. Approximately 90% of all patients with ES-SCLC will receive at least one of these regimens during the course of their treatment.

“Quite often, people diagnosed with extensive-stage small cell lung cancer rely on chemotherapy to not only extend their lives, but also to acutely alleviate their symptoms,” said , lung cancer survivor, co-founder and board chair of the . “Unfortunately, the vast majority will experience chemotherapy-induced side effects, resulting in dose delays and reductions, and increased utilization of healthcare services. G1 shares our organization’s goal to improve the quality of life of those diagnosed with lung cancer and to transform survivorship among people living with this insidious disease. We are thrilled to see new advancements that can help improve the lives of those living with small cell lung cancer.”

Approximately 30,000 small cell lung cancer patients are treated in annually. G1 is committed to helping patients with extensive-stage small cell lung cancer in the gain access to treatment with COSELA. For more information on access and affordability programs, patients and providers should call the G1toOne support center at 833-G1toONE (833-418-6663) from .

G1 received Breakthrough Therapy Designation from the FDA in 2019 based on positive data in small cell lung cancer patients from three randomized Phase 2 clinical trials. As is common with breakthrough-designated products that receive priority review, G1 will conduct certain post-marketing activities, including in vitro drug-drug interaction and metabolism studies, and a clinical trial to assess impact of trilaciclib on disease progression or survival in patients with ES-SCLC with chemotherapy-induced myelosuppression treated with a platinum/etoposide-containing or topotecan-containing regimen with at least a two year follow up. G1 intends to initiate the post-approval clinical trial in 2022.

Webcast and Conference Call
The management team will host a webcast and conference call at on to discuss the FDA approval of COSELA (trilaciclib). The live call may be accessed by dialing 866-763-6020 (domestic) or (210) 874-7713 (international) and entering the conference code: 6195528. A live and archived webcast will be available on the Events & Presentations page of the company’s website: www.g1therapeutics.com. The webcast will be archived on the same page for 90 days following the event.

In June 2020, G1 announced a three-year co-promotion agreement with Boehringer Ingelheim for COSELA in small cell lung cancer in the U.S. and Puerto Rico. G1 will lead marketing, market access and medical engagement initiatives for COSELA. The oncology commercial team, well-established in lung cancer, will lead sales force engagement initiatives. G1 will book revenue and retain development and commercialization rights to COSELA and pay Boehringer Ingelheim a promotional fee based on net sales. The three-year agreement does not extend to additional indications that G1 is evaluating for trilaciclib. Press release details of the G1/ Boehringer Ingelheim agreement can be found here.

In , approximately 30,000 small cell lung cancer patients are treated annually. SCLC, one of the two main types of lung cancer, accounts for about 10% to 15% of all lung cancers. SCLC is an aggressive disease and tends to grow and spread faster than NSCLC. It is usually asymptomatic; once symptoms do appear, it often indicates that the cancer has spread to other parts of the body. About 70% of people with SCLC will have cancer that has metastasized at the time they are diagnosed. The severity of symptoms usually increases with increased cancer growth and spread. From the time of diagnosis, the general 5-year survival rate for people with SCLC is 6%. The five-year survival rates for limited-stage (the cancer is confined to one side of the chest) SCLC is 12% to 15%, and for extensive stage (cancer has spread to the other lung and beyond), survival rates are less than 2%. Chemotherapy is the most common treatment for ES-SCLC.

COSELA™ (trilaciclib) for Injection
INDICATION
COSELA is indicated to decrease the incidence of chemotherapy-induced myelosuppression in adult patients when administered prior to a platinum/etoposide-containing regimen or topotecan-containing regimen for extensive-stage small cell lung cancer (ES-SCLC).

Injection-Site Reactions, Including Phlebitis and Thrombophlebitis

About
is a commercial-stage biopharmaceutical company focused on the discovery, development and delivery of next generation therapies that improve the lives of those affected by cancer, including the Company’s first commercially available product COSELA™ (trilaciclib), a first-in-class therapy approved by the to help protect against chemotherapy-induced myelosuppression in patients with extensive-stage small cell lung cancer being treated with chemotherapy. Trilaciclib is also being evaluated in other solid tumors, including colorectal, breast and bladder cancers. is based in For additional information, please visit www.g1therapeutics.com and follow us on Twitter @G1Therapeutics.

Tecentriq® (atezolizumab) is a registered trademark of .

A PDF accompanying this announcement is available at http://ml.globenewswire.com/Resource/Download/fb9c3593-c36f-4769-9c66-c1ca2e1f78f7

A photo accompanying this announcement is available at https://www.globenewswire.com/NewsRoom/AttachmentNg/25e03769-0cd1-482e-9a70-8b3c81bc46c3 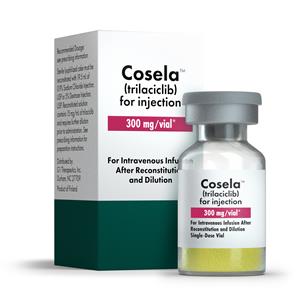